Designers and Developers: A team in Tandem 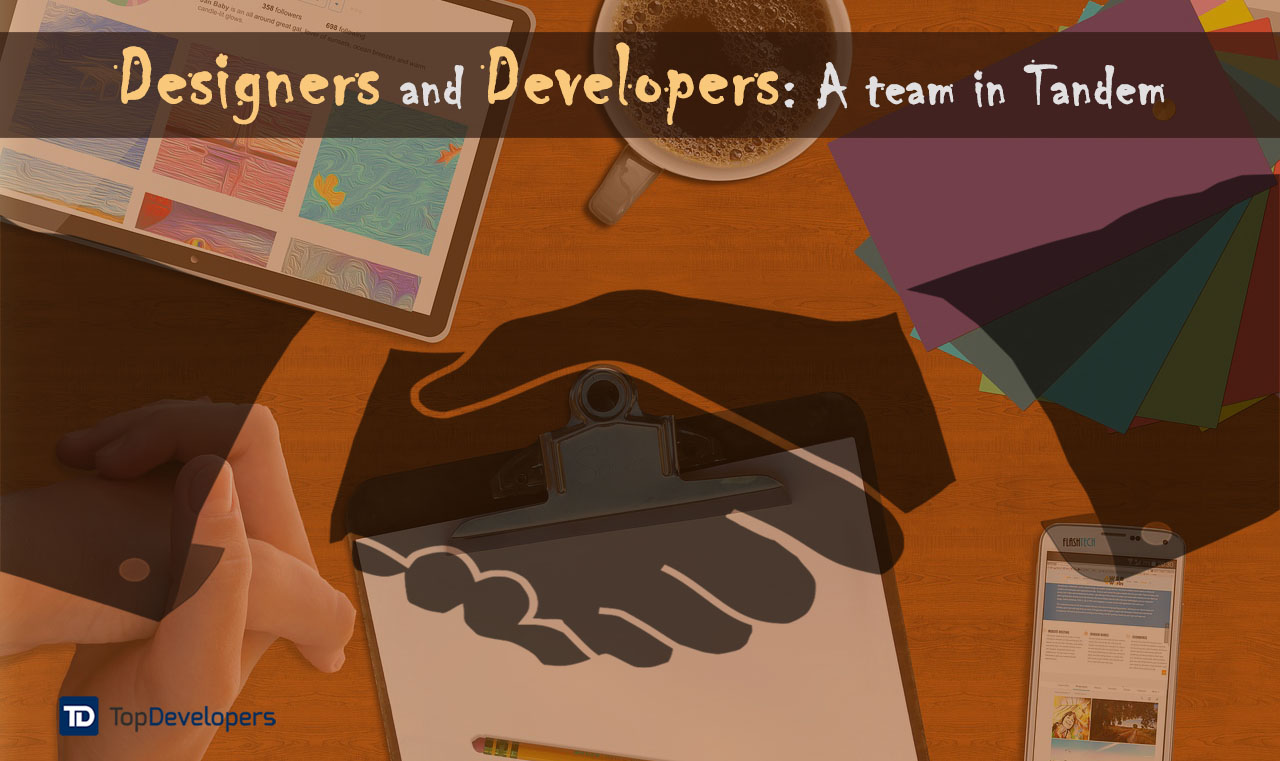 In the field of mobile app and web development, learning the art of communicating and collaborate is fairly important. With the advancements in mobile technology, most of the organizations are looking for people who are experts in their field of work. Due to specialization, both design and development are separated into more nuanced disciplines. Such is the essence that the term web designer is not a thing anymore in software and IT companies.

It sounds pure logic that web designers and web developers should always work as a team on any kind of project. But sadly this isn’t the case anymore. Albeit, the designer is the person who creates the layout and web developer is the one who works on the execution of these designs using codes. This idea of them working in tandem which looks like common sense is generally not portrayed by the tech organizations.

The working section of designers and developers must work together so as to give aesthetic design and clean codes to the app or product. This process might require a little extra time that needs to be invested, but in return, it will provide a product that will not need any kind of rework in the future.

Therefore, with a view of finding the perks of this combination let us get an insight look of how the amalgamation of designers and developers can be a fruitful combination for the technology world.

A team worth working together:

We all know that web designers and web developers are assigned separate job titles according to the tills they use for their work. Generally, the web designers use Adobe Photoshop and illustrator to create the design for the website. On the other hand, the developers use HTML, CSS and other programming languages that will make the designs work on the web. But it should be taken into consideration that whether the designers and developers operate from the same room or different countries, they need the skills of one another to complete a site or an app that will be profound and will give the desired results.

Their working as a team can lead to a more complete project. The effecient UI UX designers would collectively say that, the close cooperation of the developers and the designers can lead to an enhanced project with the best possible outcome. With an authentic two way communication, the designers can be informed about the layout that cannot be executed whereas the developers would know the percentage of precision that needs to be done to covert the desired design accurately. If this process is dealt cohesively, the app or web product would give better visual appeal and will stand-out amidst the plethora of similar apps. Moreover, when the designers and developers work in tandem, there would be an extra set of eyes which will be helpful in finding the potential mistakes.

Better brainstorming sessions can be conducted that would result in a thoughtful design of the artifact. A stable design will lead to an app that would fit into the desired platform profoundly and will not need any kind of compromises related to specifications, looks, pixel resolutions or features. Both the designers and the developers would get to know the problems faced and will together face it to solve the problem quickly and more efficiently. In addition to this, a multitude of ideas can be combined to give the created product more value and matter to withstand the cut-throat competition in the real market.  The process of app or web making would be a complete experience as the designers can understand what the developers can create.

The collaboration would also bring in a defined and specific goal with new ideas popping out about how innovatively the design or development can work. The soft skills from both the departments can be horned and cultivated which will produce better productivity among the employees.

Things to do for a better collaboration:

Now, we have a complete overview of why there should be a team of designers and developers working together. So to put words into action, start with optimum and clear communication. The team i.e. the designers and the developers will have to put the project first and make their decision by keeping the bigger picture in mind.

The best way to do it is to know your co-designer or co-developer from head to toe and their style of working. Sketch a wireframe together and make some ground rule in the forefront so that you can execute your plan and work on it together.

Communicate within your team in such a manner that everyone involved should know what the other person is doing and make sure that everyone is on time-related to their task. Keep your mind and the learning horizon like a parachute so that you and your team can put in all the knowledge that is needed and can fly high with their work.

Here the question is not about why there should be a team of developers and designers should work, the question is how they can work. Better communication and the hierarchical system can prove to the boon and a catalyst that would make the work of web or app development more competent, reliable and cohesive.