The Ultimate Guide For Building Mobile App Prototype For Your Business

Great products are always born with unique ideas. But only a one-of-a-kind idea is not enough to build a successful mobile application. Raising funds, creating the best app design, leveraging an advanced tech stack, and making the app appeal to the target audience is important for revolutionary mobile app development. All of these things are not so rosy.

With multiple pitches hitting the mobile app investor inbox daily for fundraising, it becomes difficult to differentiate the idea and start-up. Ensuring the promising features and intuitive app design solve the user problems and deliver the best experience ahead of app launch is a hard nut to crack. And, so on.

What is a mobile app prototype?

The mobile app prototype is an interactive, high-fidelity blueprint of the product idea showcasing screens, interfaces, design elements, and features with no coding.

The prototype is a visual presentation of the app that evolves from paper sketches and wireframes to prototypes and further iterations. The prototype is not functional as the MVP version of the mobile application. They only aimed to gain feedback on interface, usability, and features aspects before the project goes on the floor.

Wikipedia has fairly defined it in a single sentence, that’s- “A prototype is an early sample, model, or release of a product built to test a concept or process.”

Why mobile app prototypes have become important for businesses? 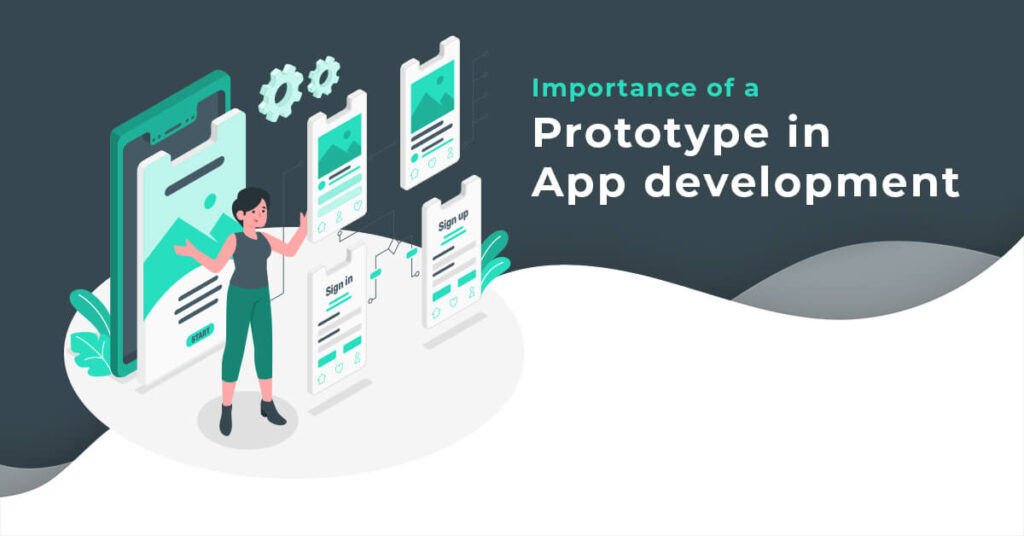 When businesses start ahead with app development without building a prototype mobile app, the chances exist for the app that it’s not well-received by the target audience. It can be prevented with prototype creation. The mobile app prototype helps in knowing the users’ feedback for the future app that makes the mobile app user-centered and meets the business goals.

If you launched a mobile app in the market without a mobile app mockup or prototype creation, if the users find it full of bugs, lacks important features, or encounters unexpected crashes, it becomes an expensive move to fix everything. On the other hand, the mobile app prototype allows businesses to know user preferences and fix things off the bat. The early research and strategic decision bring ROI at scale.

The high-fidelity prototype vividly demonstrates the look and feel of the app that engages the users. The UX prototype testing is an effective process to validate the app’s usability and the experience it delivers to the users. It ensures the app is engineered with the best UI and UX ahead of its launch.

Make the investors ready for funding

Adding stakeholders, investors, and clients to the discussion table makes the app planning strategic. The prototyping process is a way to communicate the app idea better and convince them visually how it appeals to the users and solve real-world problems, which is difficult with a textual presentation.

How to build a mobile app prototype?

Outline the problem that the app idea will solve

Before even you march head to prototype development, it’s essential to identify the problem that the future app will solve. The problem ranges from meeting business digital requirements to making the apps intuitive. If the app idea is not filling the void worth considerable, it ultimately appears in the app store graveyard. To avoid an embarrassing situation, the pain points are outlined at first which helps in determining the app’s purpose and how the app’s features bring solutions to the users.

Figure out the important functionalities

The second step takes you to brainstorm core app requirements in terms of functionalities. The prototype includes important, relevant, and innovative features. So, at first, create a list of features and then prioritize what is essential to simulate in a prototype because including dozens of features won’t bring accurate insights. The prioritization is based on must-have versus nice-to-have app features.

For instance, when Tinder- a dating app launched in the market, it was launched with a basic dating concept that facilitates the users to get a perfect match based on a few criteria. Later, it’s enhanced with swipe left and swipe right features for improving user experience.
Take 3-4 features in your prototype and then get them tested in the target market via surveys and interviews to gain rich insights.

Penned down app idea on paper

When you are ready with the list of necessary features to include in the prototype, the next step is to create a rough sketch of the prototype on paper. The sketch is a low-fidelity wireframe wherein the primary screens of the mobile application are designed with UI elements included. The arrows display the flow from one page to another.

For instance, when you create a rough sketch for the checkout page, the placeholders are drawn for product image, buttons, and details along with arrows that showcase what will happen when the user tap on a button.

The benefit of this rough sketch is it can be revised quickly and is a great medium to communicate the app idea and collect feedback. The rough sketches (Paper prototype) are turned into a wireframe where a product outline consisting of boxes, words, lines, and little description is displayed. The framework provides a look and feel of the app. You can refer to these tips to build an efficient wireframe.

Turn it into a digital prototype

The low-fidelity wireframe consisting of boxes and lines is turned into a digital prototype with buttons and text fields. The prototype tools have a library of Android and iOS UI elements that help in creating a refined user interface and enable testers to get a real feel of the app and test them better. The animations and programmed interactions turn the sketches into a pixel-perfect prototype, which brings the app to life.

Principle, Figma, Marvel, InVision, and POP are popular prototype tools that are leveraged worldwide even the non-designers to create a good version of the prototype.

The first build of the prototype is not the final version that’s presented to investors straight. Instead, it’s tested by a diverse range of audiences to get genuine feedback. The more input you get from the users, the better it will be for the prototype for enhancements. Also, the developers can gain feedback in real-time through prototype tools that allow users to comment on the prototype.

The feedback enables iterating the prototype until it gets perfect. The multiple iterations enable the creation of a prototype that addresses the issues which users are facing.

Getting a prototype verified by the clients or investors is important as it helps them know the final look and feel, and overall functioning of the app. Sharing the prototype link with the key stakeholders is not a good decision. Schedule a meeting with stakeholders and representing the prototype is a good approach if they have any questions or queries regarding app design.

Additionally, you must be ready with a story around a mobile app prototype that highlights the problem, solution, and business model showcasing why it’s a great investment. To improve the prototype quality, you can take the help of professional UI/UX designers for the best results.

The tools that make mobile app prototype creation a breeze!

With plenty of prototype tools available, you should check the intuitiveness, interactive controls, cross-platform support, templates support, and design tools so that you can get the best tool at your end.

The number of steps perhaps makes you feel that the journey from app ideation to prototyping is quite longer. The time, resources, and effort investment in prototype development pays off when the app gets a grandeur success. The prototype design is no more an optional part. It has become an important part of the app development process that provides rich insights thereby eliminating the guessing game.

The inexpensive prototype development shares the clear vision of the mobile application and allows businesses to improve the product with UX validation and stakeholders’ involvement. The expert app developers always prefer to build the prototype to ensure the app’s success.