Importance Of UI-UX Design In Defining Success For An App 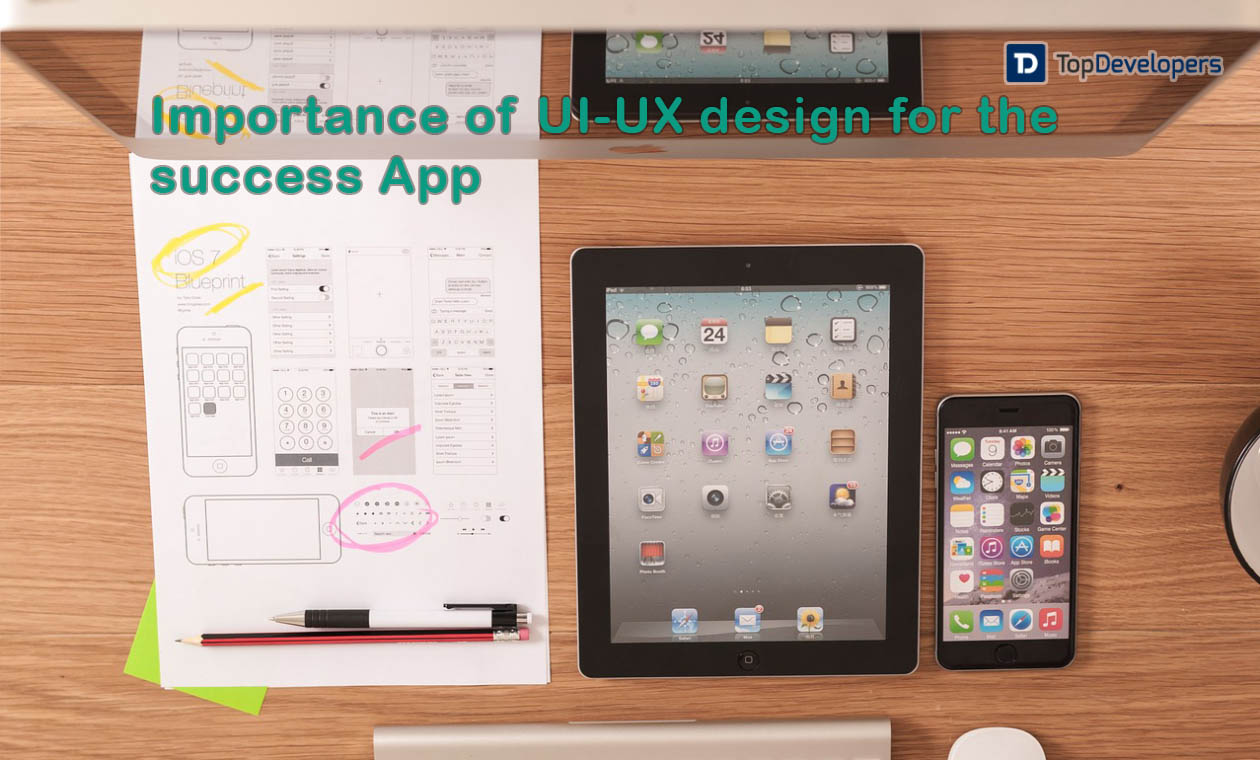 The days are long Past when desktops were the primary device to search, connect, or get entertained. Now, the mobile phones have taken that place not just in peoples’ lives, but in the business landscape as well. Now, the businesses are exercising their strong presence with mobile apps. The ‘Going Mobile’ initiative has made the app stores the beehive of mobile apps.

In the sea of apps, how the apps can make a step out from the crowd and get easily found. The answer to this question lies in a great saying by Andrew Grove-

In the context of mobile apps, the application can only communicate its value to the users when it’s easy to understand, easy to use, and easy to navigate. That’s where designers can be found putting head together on user experience design which comprises of UI-UX. The UI designing is all about the graphic designing with the aim of making the user interface simple and organized. The UX designing signify the interaction between the app and the users where UI design remains a focal point.

Both UI and UX stay at the heart of winning apps. Compromising on UX factor bluntly leads to the app failure because writing a storybook without a thought is implausible. Yes, the apps are like a good book that’s segmented into several sections, where the pages are turned by the readers only when it’s easy to navigate and intrigue the users to know what’s there on the next page.

Here, the outstanding UI plays a role in making the users browse the app with fantastic designs, brilliant color-contrast, and easy navigation structure. The UX makes the users keep using the app for a long time. The bottom line is great UI-UX combination is fundamental to create a desired buzz in the market, so the developers should strike an optimal balance of UI-UX design.

Take a quick glance at the success which excellent UI-UX design brought to app development:

The first impression counts. It’s everything to the people as they notice your app even before downloading it. The moments of the first impression are very crucial and determine the success story of your app as in the starting 5-10 seconds, the users make the decision to install the app or delete the installed one. The developers must spend time in improving the app in a visual sense along with rich functionalities.

The apps with great visual appeal and flawless navigation increase the user’s interaction, and the experience it delivers improves the stickiness with an app that makes the users coming back. The best experience engages the users, which in turn, helps in creating a breed of loyal users,that’s a big asset to the brands. The conjugation of UI-UX is lending a hand to boost user acquisition and retention, which defines the app success.

The brands are hopping on the mobile bandwagon to establish their presence and identity in the market. Certainly, the bunch of unique offerings differentiates the brand, but these need to be represented in the app with innovative features and eye-catchy designs to get ahead of the pack. Theoretically, all sounds good, but when it comes to shaping everything into a mobile reality, it leads to a chaos. Beware! The user experience can make or break the app success.

The mobile app is a reflection of the brand- it mirrors what the brand is, how it works, its offerings or services, and so on. The optimized UI-UX design will let the users experience the level of contentment using the brand services. Measure the success of UI-UX to ensure it helps in gaining the customer’s confidence and winning them forever. Invest in the UI-UX designing that’s critical to building business credibility, and trust.

The UX design fundamentally lies in the app’s functionality where user journey, micro-moments, and content positively impacts the business mobile presence. There are many elements of unprecedented UI-UX combination like- valuable, accessible, useful, desirable, findable, credible, and usable, which boils down to one thing that’s direct the visitor to the app and make them download the app.

Consequently, when the app is able to make the users feel good from the moment they glance at the app’s description to the point they navigate around the app, the traffic volume will definitely get improved as a happy user will share the app info with his friends, that in turn bring more users to the app.

A good UI with pretty graphics and stylish fonts can draw the visitor’s attention and make them click the link to get an overview of the app in the app store, but it converts them only when the app creators have taken care of feature- ‘browsing and using’ in the app. There are a few tweaks needed in the UI design to create a good user experience that the user will carry post clicking CTA.

Make certain with UI-UX, the conversion rate can be optimized only when you are able to make the most out of the moments that user spend post-conversion. It’s an ideal time to boost engagement and persuade the users that it’s the one they are looking for. Make the users look no further with great UI-UX combination to lengthen their stay on the app.

What to keep in mind to bring more rewards with UI and UX designing?

The app jam-packed with minimal design, useful features and clutter-free layout help in winning the users because the users don’t have the time to read the content, explore the functionality, or navigate around to understand what the app is. Keep it simple and easy.

Keep in mind, it’s a mobile app. The screen sizes vary largely, so the designs must be crafted in a way that they appear impeccably on every screen without cutting corners or with the image resolution problem. Second, the navigational buttons’ position and size must be kept optimal catering wide audience needs.

Not breaking convention is okay, but make a mobile app browsing a fun. Wrap the app with cool buttons, new fonts, 3D effects, beautiful colors, moving elements, texture and pretty more that users love it. There are numerous options that you can try but don’t overdo keeping simplicity in mind. It smoothens the user’s journey.

Setting the imagination free and playing with design conventions sometimes proves to be a costly mistake to the app creators. Tweaking in the standard icons, symbols, or buttons, make the users confuse and they need to make an effort to learn and understand your app, that’s disastrous. It impacts the conversion rate.

The users are great skimmers when the functionality or image takes the time to load. After five seconds of waiting, the users start thinking to shift the app as an alternative, which means you are losing the valuable users. Optimize the app UI-UXto encourage conversion and retention rates.

Be open to feedback:

The feedback is a pointer to what’s right and what’s wrong with your app’s UI-UX. Along with suggestions, it also generates interaction with the users and communicates the insights that how large your app’s fan base is interested in making the app better.

Finally, it’s time to get creative, keeping a few points in mind. Oops! We missed one thing.

No issues, a little late, but lets you introduce who are UI and UX designers:

Hope, now you are undoubtedly familiar with the fact that UI and UX are two different terms, and together plays a crucial role in defining the app success. No one can take the place of another. We can say the UI designers are like the grooms and the UX designers are the best men on the planet who works together from the beginning. J

UI designers are liable for the visual aspect of the app who creates design, layout, and graphics by playing with colors, typography, fonts and other design toolkits. They are set free to add wings to their imagination and craft something that’s amazing.

On the other hand, the UX designers conduct the research and study the target user’s needs. Based on the information, they create wireframes and layouts which are in sync with the experience the users will get.

The UI designing and UX designing are basically the two sides of same Mobile app designing coin where the best-designed app is a half of a path to success and rest half will be rewarding when the first-half stay secured.

Among the billions of apps, the UI and UX are the key factors that can build your app up to the user expectations complemented with heightened user acceptance and improved user contentment. Here, the investment of hard work is all-imperative, when you want the users to choose your app over the competition. As the mobile app world is evolving, taking care of the UI and UX design has become a cardinal aspect of the mobile app development forgetting success. So don’t negotiate with them, else they bring more harm than good to your app.