A Comprehensive guide to reinforce your App User Acquisition Strategy 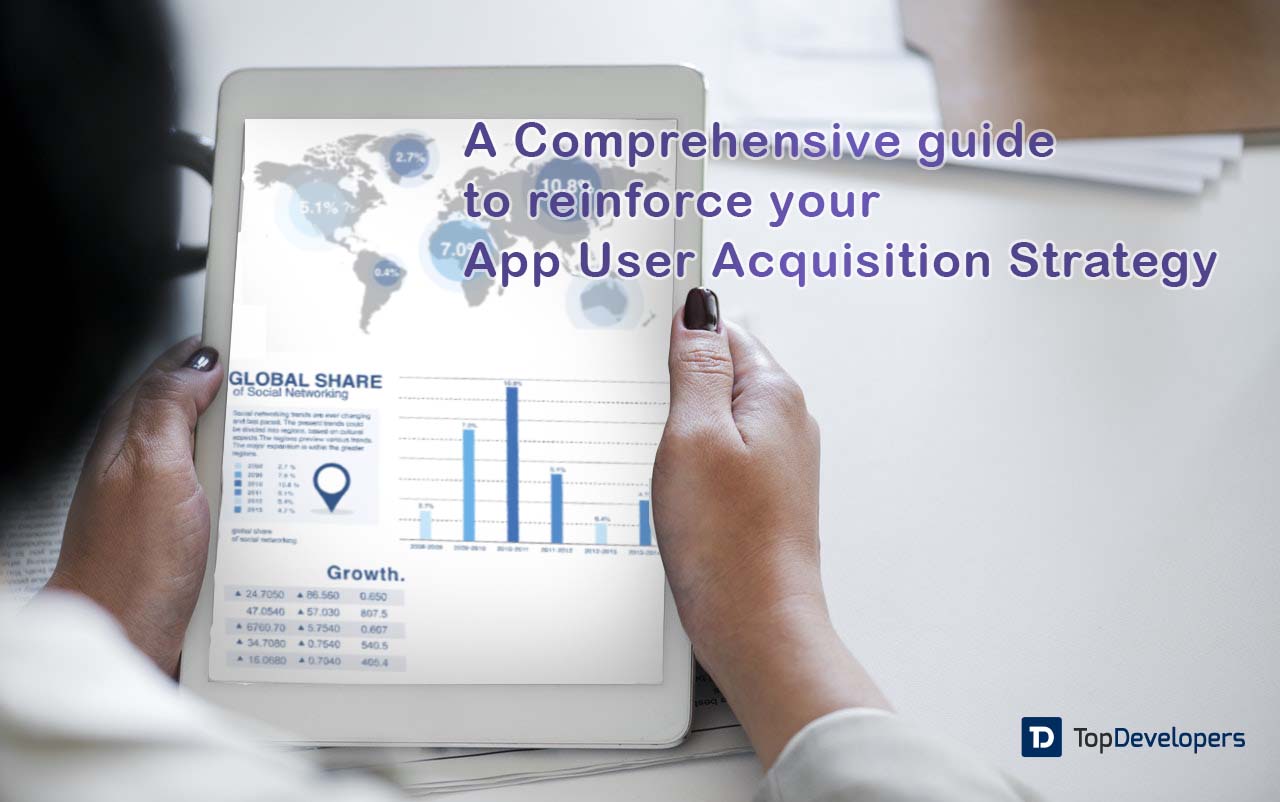 From every perspective, the mobile app universe is in the spotlight. The global mobile app revenue has climbed to nearly $60 billion in 2017, that’s up around 35% from the year 2016. Similar mobile app event expected for the year 2018.

The intriguing fact perhaps drawing your attention towards a list of quality mobile app development companies. But, earning the revenue in the app marketplace is not easy-peasy. Presently, the app market has become a battlefield where the millions of app creators are vying for a piece of the pie. It does not indicate no more new apps will be able to gauge the user’s attention. Instead, it’s just the beginning of the mobile revolution.

Mary Meeker’s 2017 Internet Report is proving the same with the fact that there is a large gap of $22 billion dollars between mobile time spent and ad spend.

It’s clear, with increasing pool of mobile users and mobile apps, it’s getting difficult both for users to find out new apps and for apps to attract the target users. It implies the competition is harsh, but not ceased with the availability of sea of apps. Still, there exists plenty of opportunities, and mobile marketers need to create and execute the app user acquisition plan that converts and bring huge success to the app.

It’s cool! But, suddenly, the second thought with an array of questions- How to create the plan? What are the things to consider at the planning stage? What to do after the app launch? Does user retention begin with new user acquisition? And so on, puts you off. Oops! Don’t get stressed. To help you to not get lost around the lots of moving pieces of user acquisition strategy, we have created a guide which doesn’t burst your app success bubble with a few hundreds of downloads or the app abandonment by the users after its first use or after 2-3 months.

Let’s take a look at how the top ranking apps have created the app user acquisition strategy which brought huge downloads, high customer satisfaction, fuel up the retention and great revenue to them:

Optimize for the App Store

It’s absolutely essential to get easily discovered amidst the end number of apps in the app store. The app will show up at the top, when users search for such apps, only when it’s optimized for the app store. It’s best to apply app store optimization, the SEO of app world, my friend.

Basically, the ASO of the app depends on two types of factors which can make or break the app success. The primary factor includes the term or keywords used in the title, the use of a relevant keyword in the description, a catchy icon that evokes emotions and impresses at the first sight, and the screenshots that illustrates app storyline. These are the basic elements which the app must have.

Going ahead, good reviews and ratings, and regular updates comprise secondary factor that highly impacts the ranking and matters the most for listing the app in top 100 apps.

Combining these two factors, there are a few more things that app makers need to consider such as ASO variation according to different stores so follow the store-specific guidelines, go for localization catering various nation users-specific needs, analyze the competitors’ target keyword and think about unique value proposition that app offers which ensures the potential users can find, download and use the app effortlessly.

Simply counting on ASO for mobile app growth means you are putting a nail in the coffin. It’s important, but not everything to user acquisition. There is a master plan which you can use to spread the app word like a wildfire and acquire millions of users without breaking a bank. The organic acquisition is the one profitable strategy, which if used rightly, it can create wonders for you. See how?

Using PR strategy is a roller coaster ride where the likelihood of driving awareness and gaining conversion at scale is high when it’s approached and pitched in a right way. Ensure the press outlet covers exactly what your app does and narrate the app’s story that has a personal element and emphasizes that app idea is disruptive with some tweaks so that it can touch reader’s heart string and compel them to download the app.

The social power can be harnessed to catalyze the mobile app growth. The study shows that nearly half of the app users expect to get the services through social channels especially Facebook, but only 20% of the brands use them. The people are talking about your app on the social media and want to engage and be heard. Let’s do it! Post regularly and leverage the user-generated content to drive more engagement and increase the word of mouth.

The journey from 100 users acquisition to 100,000 users depends on how best you can make of the existing users. Yes, it’s all about the referral program where the acquired users can be encouraged to refer a friend or family members to install the app. It’s true the users trust their friends or family members more, so referral will work, but less often, the users without any benefit spread the word. Integrating incentivization in the referral program will increase the app sharing on social channels. Also, the referral incentivization can be tailored based on the traits, quality, and potential of the users, so make the brand advocates or brand ambassadors judicious.

The reviews and ratings play a critical role in the app success which can persuade the visitors to download the app or drift them to the competitors. Ask the users to provide their opinion with in-app messages or push notifications. If they show reluctance, then reward them or offer in-app asset in the exchange of providing the feedback. Finally, post the reviews and ratings on the app store without ignoring the negative reviews because users pay more attention to the critics before installing any app. Also, answering the disgruntled users in a convincing manner can turn the table upside down.

Give a try to the paid campaigns

Casting a wide net with organic channels is hard to understand and difficult to get value out of it. In case, you have a good bank balance, then overlooking the paid advertising considering it as a not worthy endeavor is a mistake. The paid acquisition campaigns drive consistent traffic and propel the app in the right direction with existing user base which can be retained and grow organically. Here are some paid channels:

Undeniably, social media is the titan of paid campaigns, but driving the users from social platform to the app is a difficult and complex process. Every social channel is not the best fit for every app, so you have to identify and then use the channel to engage with the users and make them come back. For instance, Facebook ads are highly effective in tapping the massive audience with the advanced personalized ad campaign, Instagram ads work better in selling lower price products, YouTube ads are effective for high-priced products, and Twitter ads that boast to increase the TwoDots game app installs to 1 million in a duration of a few weeks.

The solid option Google AdWords and a new entrant Apple search ads for iOS apps are also the best to place. In addition, there are some ad networks like- TapJoy, AppLift, Conversant or Opera Mediaworks where you can invest to extend the targeted user’s reach. These ad networks are the bundle of websites and publishers which have highly curated target user base. Narrow down the choice to one ad network partner because all of them are not equal.

The pro tip for creating any paid ads- ensure the ad content must be relevant and succinct; refresh the ad content and visual on multiple ad networks; never deceive the users with fancy content as it diminishes the user trust; keep A/B testing and refining the ad strategy to find the actionable aspects.

Tracking the performance is important

Closely monitoring the app performance on the broad spectrum of app promotional channels and then narrowing down the strategies based on the data insights helps in creating the ad campaign that’s optimized for iconic success.

Getting the app acquisition strategy right is tricky where you need to consider a couple of components such as check how your ad is performing with CTR and set it as a benchmark; going at a granular level to measure how the ad is performing across individual channel; take a sneak peak inside the results the ad partner is giving; know the average session length to quantify user engagement level; verify whether the campaign is attracting right target audience or not; assess user’s life time value which indicates retention rate and determine campaign success.

The components of the app acquisition campaign reveal whether the channels or campaigns used to amplify the conversion and retention will work or not.

You cannot be declared as a winner with an unprecedented app development. You just won the half battle and the rest half depends on taking the app to the world. The app success can be predicted and estimated based on the number of users the app will acquire. Well, there is a good news for you!

The iOS App Store will have over five million apps by 2020 and similar consequences can be expected for other app stores as projected by Statista.

The explosive growth in the mobile industry won’t be experienced by all the apps in terms of users adoption and monetization, while only a few apps will increase their penetration and profound impact on the market. In this age of multidimensional leading, optimization for the app store, organic channels, and paid channels, and output quantification of the apps will be integral to the app success. These are the winning strategies that have been rigorously tested by many successful apps.

Now, it’s over to you! The app store favors the easily discovered where you can make the app shine in the mobile app ecosystem bringing them all together. Implement the strategy which boosts user acquisition by providing compelling and personalized experience to the users.