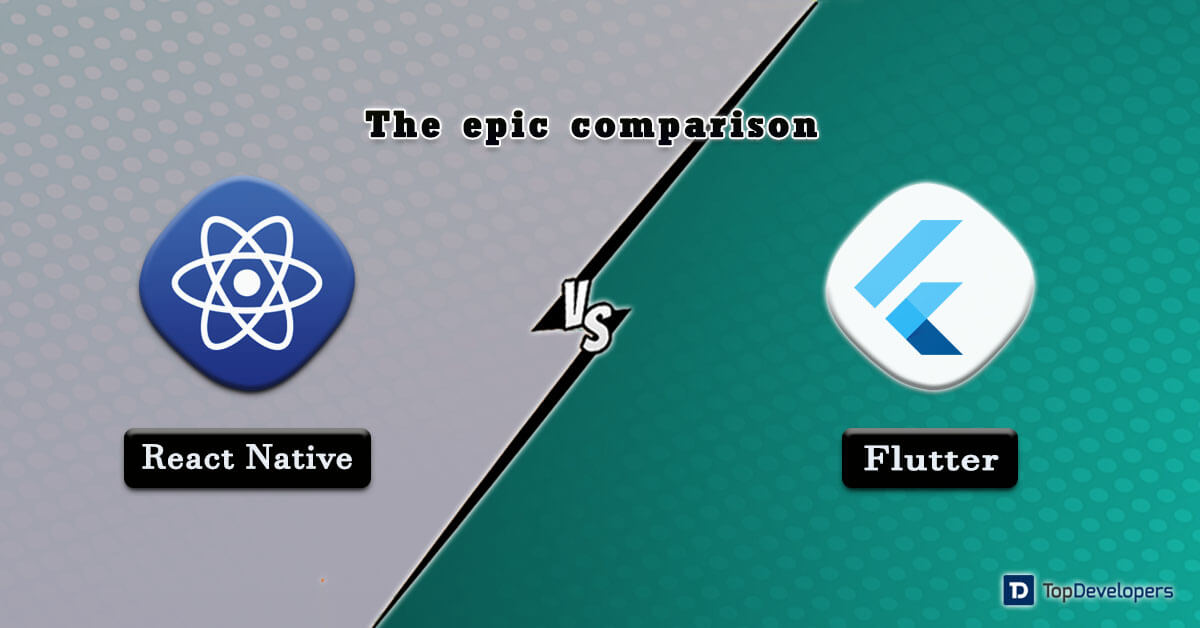 An adventure with the comprehensive app development starts when a potential client reaches out with a need for an app, which must be ready in a matter of 20 weeks. Besides, the project scope which at times keeps changing needs to be managed somehow, so that the cost of change is not massive in terms of dollars, time, and resources.

The idea of building a comprehensive app for the different platforms is not less than a nightmare for the development team, due to the short period. This used to be a major crisis situation a couple of years ago. That’s where we found two frameworks- the old kid React Native and the new candidate Flutter which looks promising for efficiently managing the development, tackling the changes, and delivering the build on time.

However, the problem doesn’t end there. Going ahead without a proper mindset of which one to choose from the two frameworks was impossible, so we thought about providing some cues on the development expertise and experience by creating a summary of the one-to-one comparison of React Native and Flutter to easily identify which option will be a perfect fit for the project giving them more time and tools to build the best-in-class app.

With Flutter, the ready-to-use components enable the functional component integration, app testing, and deployment in a matter of hours. But, the framework is still not stable and supported by continuous integration platforms, so it becomes necessary for the development team to develop, use and keep the custom contents ready.

On the other side, React Native is here for a long time with a large number of packages as compared to Flutter. The ready-to-apply elements with little customization facility eliminate the need to create the functionality from scratch, and hot reload enables quick reloading without recompiling, which in turn, allow the mobile app developers build the app in reduced time.

The result: React Native is a winner.

The Flutter framework offers excellent graphics library, device API access and design-specific widgets that help in adding the native look and feel to the app without requiring the use of third-party libraries. These widgets implement the material design concept where the UI elements are directly copied. Using the platform-agnostic widgets, the layout designs, animations, and text and styling can be implemented. On the flip side, the important elements and iOS-styled form components are unavailable in the library, and the degree of customization is zero with widgets.

Fortunately, React Native provides just essential UI elements and to build the native-like UI elements, the developers have to rely on the third-party libraries heavily. However, the adaptive components enable engineering of the remarkable native experience across the diverse platforms.

Performance – who is a winner?

In Flutter’s case, the Skia C++ engine used for the compilation of every element, which inches it closer to the machine language and offers excellent performance. Also, Flutter is built on the top of Dart language, which has most of the native components inbuilt thereby eliminating the need of a bridge to communicate with the native modules.

In the React Native applications, only the UI components are compiled to native equivalents, and JavaScript Bridge is used to communicate with the native components, which declare the framework as a winner in the events of native app development. But, when it comes to hybrid app development, the issues related to architecture, native components, and libraries don’t allow the React Native to outperform Flutter.

The result: Flutter has got the upper hand.

Documentation – which is better?

The documentation of React Native is a developer’s friendly where everything from guides on installation and native modules uses to the platform-specific component creation is clearly explained. However, it’s somewhat disorganized, clumsy, and lacks a couple of things.

The community of Flutter has put extra work in making the documentation thoroughly and quite helpful with up-to-date API references and comprehensive resources. The clean, concise, and smooth documentation have made the job of Flutter’s developers insanely easier.

The result: Flutter’s documentation is better.

Learning curve – which is easier to learn?

With React Native, having proficiency in JavaScript will solve the purpose of cross-platform development. The support for hot reload feature saves a lot of time while testing the changes in the UI. The JavaScript is a universal language that provides support to the range of IDEs so developers can use the IDE or text editor of their choice.

Flutter is based on Dart framework that provides support for limited IDEs, which means the developers have fewer options to consider for IDE and text editors. With the hot reload feature, it’s easy to start developing MVP, but as the complexity grows, learning and adopting new concept becomes essential.

The result: Being a mature framework- React Native is easy to master.

Popularity – which one is most starred?

React Native is an older framework when compared to Flutter framework. The consequent updates in the framework have made React Native stable, feature-rich, and most starred on Github with over 70k stars. Also, its growing popularity has helped in earning the popular clientele including Skype, Facebook, Tesla, Airbnb, Instagram, and Walmart.

Flutter has made its way to the world post React Native release, and gained enough attention across the globe. But, still, it lacks features and tools to catch up with the competition and match the industry standards. As time progresses, the Flutter community will undoubtedly grow in size and popularity.

The result: React Native is a winner.

Stability- which is well-built?

React Native is considered as far more stable as compared to Flutter platform. Although the stable version of both the frameworks is available in the market, the stable release of Flutter is released a few months back. That’s why the Flutter offers better usability rather than stability as the room for the improvements still exists.

React Native- being old and trusted framework backed by a large community is more stable and mature due to the subsequent stable releases launched in the recent past.

The result: React Native steals the show due to its stability.

Making the comparison is alright, but declaring a winner is a big question. And, that’s nearly impossible to answer the best fit for all the projects as it depends on business requirements, budget, timeline, features, and performance. Both frameworks- React Native and Flutter are packed with their benefits and downsides, which businesses need to assess before picking the best.

Flutter is an excellent alternative for the apps where breathtaking UI, superior performance, and faster time-to-market are the top preferences. On the other side, React Native boasts for stability, high performance, mature community, and popularity.

React Native and Flutter are the two top cross-platform mobile app development frameworks that are highly rated and widely used to develop applications. It’s safe to place a bet on any of the frameworks, but a selection should be made knowing the strengths, weakness and most importantly the objective. Here we have described certain aspects to help you decide which framework is better suited for your app development project. Making the right decision in selecting an apt development framework could go a long way to help you gain a more comfortable ground in the market with the groundbreaking application.