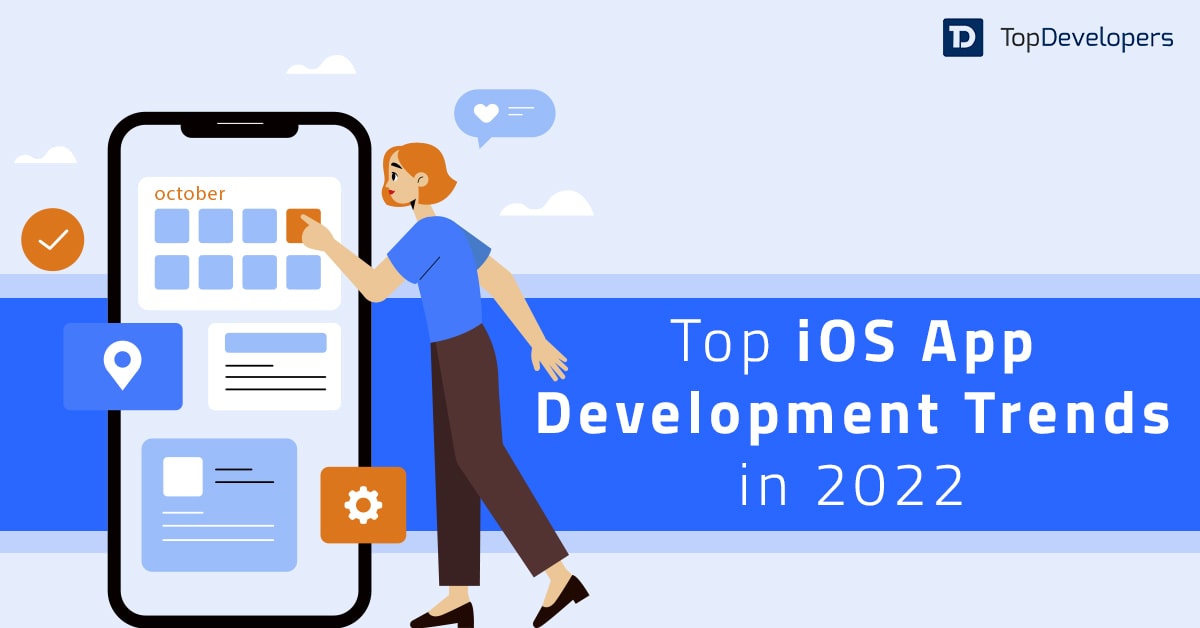 iOS app development is quickly adapting to changing times. Right from it was launch in 2007, iPhone has always been the center of attraction in the smartphone theatre. iOS is one of the top two mobile operating systems ruling the smartphone world right now. Analysts and smartphone enthusiasts keep a keen watch on the latest developments in iOS, as Apple always releases benchmark-setting technologies.

Latest iOS App Development Trends to Look for in 2022

The noteworthy rise in hacking attacks has bereft the reputed image of the lucrative brand at the mercy of ordinary mistakes. Security is the topmost priority for all mobile applications out there.

Apple is known for its USPs and robust algorithm for the same. Its strict policies and vigilant, hardcore security layers prevent breaching in iOS devices.

With the launch of iOS 15 in the market, Apple has been equipped with reliable security mechanisms and protocols. Now, developers can integrate App Transport Security(ATS) into their applications when connecting to web services for strong data protection and higher security.

One of the most existing trends of iOS development is smartwatch software building. Wearable technology is growing progressively, according to statistics, the number of connected wearable devices is expected to reach 929 million by 2022.

With Apple upgrading the stature of the Apple Watch to that of an independent device, the significance of wearable technology is expected to become an important part of our lives.

Apple sold over 7.6 million smartwatches worldwide just in the first quarter of 2021. In line with the forecasts, sales are expected to increase by 2022, especially considering that Apple has announced new versions of watches monitoring the health of its owners.

Initially, Apple pay had a slow start in its home market, the U.S., when it was launched in 2014, with only 1 in 10 of its users coming from the U.S. during that year. Fastrack 5 years, and in 2019 Apple Pay has overtaken Starbucks as the leading mobile payment app in the U.S.

It was about seven years ago when Tim Cook took the stage at Apple’s WWDC and introduced Apple Pay. With 507m users worldwide, the global figures are expected to rise in 2022. Apple Pay is accepted at over 85% of retailers in the US making it feasible for contactless payments- from grocery stores to vending machines to subway stations and taxis.

Apple persisted with the idea, and its brand image as a secure brand helped in broadening the base of Apple pay. Four hundred thirty million iPhones in the world have installed Apple Payout of the billion odd iPhones according to a report.

Swift, being the official programming language for the applications built with iOS, plays an important role in transforming the ideas of iOS developers into reality. More than 50% of applications available on the app store are written in swift. Apple is promoting swift as a versatile programming language that can be used to write code in macOS, iOS, watchOS, and tvOS.

With the launch of Swift 5.5, Apple has improved the language’s ability to let the developers create better APIs and also simultaneously reduce the amount of boilerplate code.

Swift 5.5 is a modern language that has been created after years of coding experiments; the APIs in Swift 5.5 are easy to read and maintain. The code is clean, and the language is safe by design, making it less prone to errors.

The memory usage is now efficient, minimizing the burden of garbage collection. Apple is continually innovating swift, and it is clear that it wants to position Swift as the language of the future.

Augmented reality is the hot new trend in the smartphone industry. Games like Pokemon Go have already shown to the world what a smartphone and a great idea can do using AR.

Apple has launched the ARKit, which helps the developers in building high-quality AR apps. With the launch of ARKit-3, the latest version of ARKit, Apple has given wings to the creativity of iOS Developers.

There are many cool features in the ARKit which allow the iOS app developers to create life-like experiences for their users. Let’s discuss

With people occlusion, AR content can be programmed to pass behind and in front of people realistically. Earlier the effects seemed unnatural, but with ARKit-3, Apple appears to have solved this issue. People’s occlusion helps in making the AR experience more real and immersive, giving the user a closer feel of being in the virtual world.

This feature allows the iOS developers to capture a more realistic motion of a person by using only one camera! Those who have even a passing interest in AR will know how difficult it is to accurately mimic the body movements of a person using only one camera. Motion capture helps in accurately capturing small details of the motion of a body. It is then used as an input into the app, thus improving the iOS app developers to keep humans at the center of the AR experience.

Use front and back camera simultaneously

This feature opens up new possibilities by allowing the developers to use the face as well as the back camera simultaneously. It can allow the users to interact with the AR content in the rear camera by using their face.

In the new ARKit-3, Apple has provided the feature called multiple face tracking, which allows the developers to track up to 3 faces simultaneously by utilizing the right depth camera of Apple devices.

This feature is especially helpful for developers of multiplayer games; the iOS developers can now enable collaborative sessions in AR, making the AR experience more productive.

With the new ARKit-3, the smartphone can now detect 100 images concurrently. The system also provides you with an accurate estimate of the physical size of the image, which makes 3-D mapping more accurate.

It is a new framework that has camera effects and animations along with photo-realistic rendering capabilities. This framework has been primarily built by Apple for AR.

Apple has taken the game of AR app development a notch further by launching the USDZ(Universal Scene Description) format. This format supports rich animations like the ones which see on AR. All the new Apple devices with iOS 12 and above will be able to project these files automatically.

Ikea’s app allows you to see how furniture would look in your room; you can even see minute details like texture and color and have an accurate estimate of the size of the furniture.

With companies like IKEA adopting AR to showcase their products, the world is waking up to the possibility of using AR in severe commercial applications.

Thus we can see that Apple is making all the right noises when it comes to the field of AR.

The trend is expected to continue in the future.

Siri, the smart digital assistant who had been launched with iOS5, has been helping iPhone users set reminders, call cabs, know the weather and ask useful questions.

Apple started giving out tools to integrate Siri into third-party apps from iOS 10. Apple has defined certain domains that an app must contain to use Sirikit. The domains are:

With the popularity of voice assistants like Alexa and Google Assistant rising, Apple is equipping Siri with better capabilities to take on the competition.

Moreover, with iOS 13 Siri now has a more natural-sounding voice, you can notice the difference in Siri’s voice when she speaks longer phrases. Siri’s suggestions have been integrated into podcasts, maps, and the safari browser. Thus Apple is following a strategy of spreading Siri to its products, and by opening up Siri to third-party developers, it has made clear that it wants Siri to proliferate faster.

Advanced speech recognition capabilities such as utterance detection, acoustic features, streaming confidence, and pronunciation information have been included in the new core kit. These features allow the system to detect speech accurately.

Apple is seriously looking towards the smart home market, a market where it is considered a laggard. Apple has recently increased the size of its home kit team so that it can catch up with competitors like Google and Amazon.

The Apple Homekit is a system through which the user can control all your smart home devices via an Apple device. Apple knows the importance of being in sync with the customer in this vital market and hence is putting all the requisite efforts to improve the smart home experience with Apple devices.

Although the number of devices that can be connected with the home kit is presently limited, Apple is increasing the number of tools at a rapid pace. In the market, users can know which accessory will work by referring to a label that says, “works with Apple HomeKit.” Through the iOS app, the users can manage many attachments simultaneously and even give commands to Siri and bundle various activities. For example, the user can program Siri to turn on mood lights, play soft music, and turn on the smart coffee maker when the user says, “Hey Siri, I am home.” This situation, where many commands are activated by using one power, is known as creating a scene in the Apple lexicon.

By launching ARKit, Core ML Kit-3, and Swift 5.1, Apple has made it clear that the speed of change in iOS app development is going to accelerate. Technologies like Machine learning, Artificial Intelligence, and IoT are going to open up new dimensions, and Apple’s iOS seems ready for the future.